Remission from depression is possible. 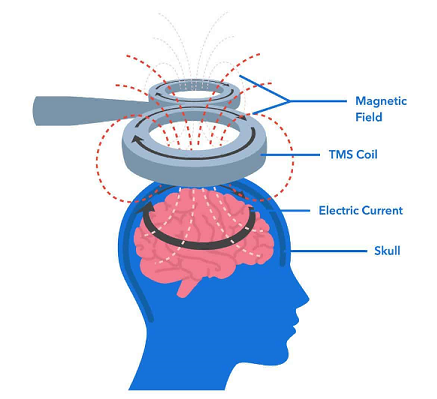 Transcranial magnetic stimulation (TMS) is a noninvasive procedure that uses magnetic fields to stimulate nerve cells in an area of the brain found to be underactive in people with Depression. TMS artificially stimulates an area about the size of a golf ball to improve symptoms of depression. TMS is typically used when other depression treatments haven’t been effective.

TMS Therapy is indicated for the treatment of Major Depressive Disorder in adult patients who have failed to receive satisfactory improvement from prior antidepressant medication in the current episode.

Repetitive transcranial magnetic stimulation (rTMS) uses a magnet to activate the brain. First developed in 1985, rTMS has been studied as a treatment for depression, anxiety, ocd, PTSD and many other disorders 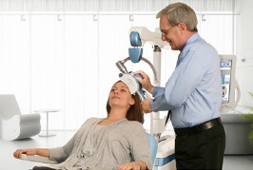 Transcranial magnetic stimulation (TMS) uses a targeted pulsed magnetic field, similar to what is used in an MRI (magnetic resonance imaging) machine. While the patient is awake and alert, TMS Therapy stimulates areas of the brain that are found to be underactive in people with depression. During an rTMS session, treatment coil is placed against your scalp near your forehead. The treatment coil delivers a magnetic pulse that stimulates nerve cells in the region of your brain involved in mood control and depression. Though the biology of why rTMS works isn’t completely understood, the stimulation appears to impact how the brain is working, which in turn seems to ease depression symptoms and improve mood.

There are different ways to perform the procedure, and techniques may change as experts to learn more about the most effective ways to perform treatments. Please view the Video below for more information:

Why to do TMS therapy?

In 2008, rTMS was approved for use by the FDA as a treatment for major depression for patients who do not respond to at least one antidepressant medication in the current episode.

The first clinical trial for TMS funded by NIMH, was published in 2010 found that 14% achieved remission with rTMS compared to 5% with an inactive (sham) treatment. After the trial ended, patients could enter a second phase in which everyone, including those who previously received the sham treatment, was given rTMS. Remission rates during the second phase climbed to nearly 30%.

Clinical studies with over 900 people have shown that TMS may help achieve remission for people living with depression.

TMS was included in the 2010 American Psychiatric Association (APA) Practice Guideline for the Treatment of Patients with Major Depression—guidelines that provide recommendations for how psychiatrists treat depression.

Every day with depression is a struggle. When antidepressant medications aren’t working, it’s hard to know what to turn to next.

Many people with Major Depressive Disorder have turned to TMS Therapy to take control of their depression. Hear their stories:

Generally, rTMS is considered safe and well-tolerated. However, it can cause some mild side effects. 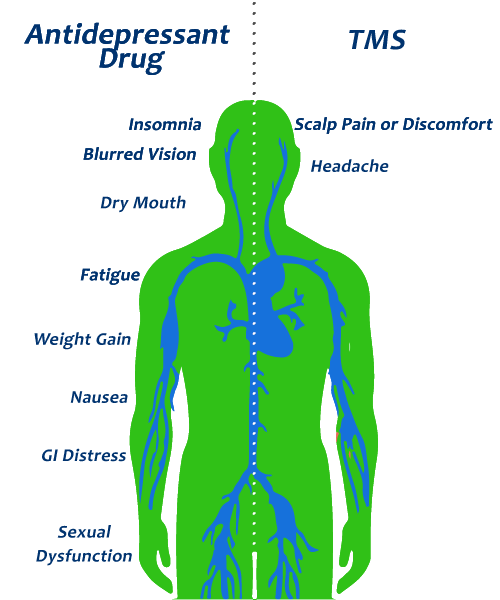 Side effects are generally mild to moderate and improve shortly after an individual treatment
session and decrease over time with additional sessions. They may include:

Is TMS right for you?

The FDA and the manufacture of the NeuroStar system have identified the following reasons a patient would not be able to receive TMS treatment.
If the patient is or has any of the following:

We would be happy to contact your insurance company to find out about your plan coverage and what your estimated cost would be. There is no charge for this service, so please give us a call.

We have specialized in TMS

Come and meet our TMS specialized technician, that can guide you through the process involved in TMS Treatment. We can solve any query or questions you have about TMS treatment and is that right for you or not.

Do I need TMS treatment?

If you agree with two or more of these statements, TMS Therapy may be right for you.

AM I A GOOD CANDIDATE FOR TMS THERAPY?